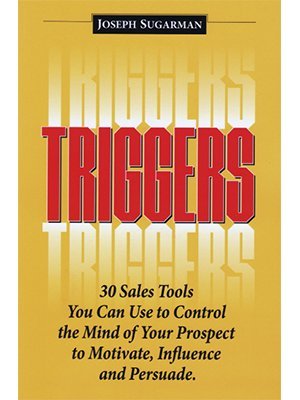 30 Sales Tools You Can Use to Control the Mind of Your Prospect to Motivate, Influence and Persuade

Dramatically increase your ability to sell by learning how to control the mind of your prospect using 30 powerful psychological triggers to motivate, influence and persuade. Discover the one secret very few sales professionals know, yet it doubled response to a simple offer.

Discover how to make your prospects feel so guilty that they can't help but buy from you. Discover how to take an impossible situation and turn it around to your advantage through a simple sales technique. Buy this book now to improve every aspect of your selling and marketing skills.

Now, if you’ve never heard of Joe Sugarman, he was the guy responsible for the huge ultra-successful advertising campaign, I think probably in the 80s might be wrong with that, called Blue, I think they called Blue Blockers. They were a type of very innovative sunglasses which protected your eyes from ultraviolet rays and went to sell on hundreds of millions of pounds, I think, of products.

Joe Sugarman is one of the kings of direct response. He did this for his own business, which is something I really like. He wasn’t just a copywriter did it for other businesses. And this book is based on 30 sales tools you can use to control the mind of your prospect, motivate, influence, and persuade.

Similar, a little bit, to Cialdini’s Influence. But in here we’ve got 30 different triggers you can use in your advertising.

I’ll just go through a couple of them now. I actually got this signed by Joe. I’m very proud of it, and it’s a limited edition one. So the triggers are, let’s just go through some of these triggers now just to show you what they are.

The secrets of selling, sorry, let’s grab the page.

So they’re intriguing titles, and then each title has a specific type of a way of selling things. So it would be how to create quickly, creating urgency. Again, similar things to Cialdini’s Persuasion, but goes into 30 different techniques that you could use to help influence, sell more stuff, persuade more people to do things you want them to do, in your marketing message.

So highly recommended. Again, really easy to read. Can read it in an afternoon, and definitely one to put on your copywriting books.