This Book Is NOT Just For Business Owners

This is probably one of the most important books if you’re a business owner that you should be reading.

And this book basically I think you should read if you’re not in business and you just want to understand what makes people tick and what influences people to do things. The book’s by Robert Cialdini, who’s a doctor, a professor of psychology. I’m not sure what his exact title is. But this is probably one of the best books I’ve read. I’ve read it probably about five or six times now. And I just wanted to show you a few little things about it. So if you found it useful, maybe it’s something you want to put on your reading list too. 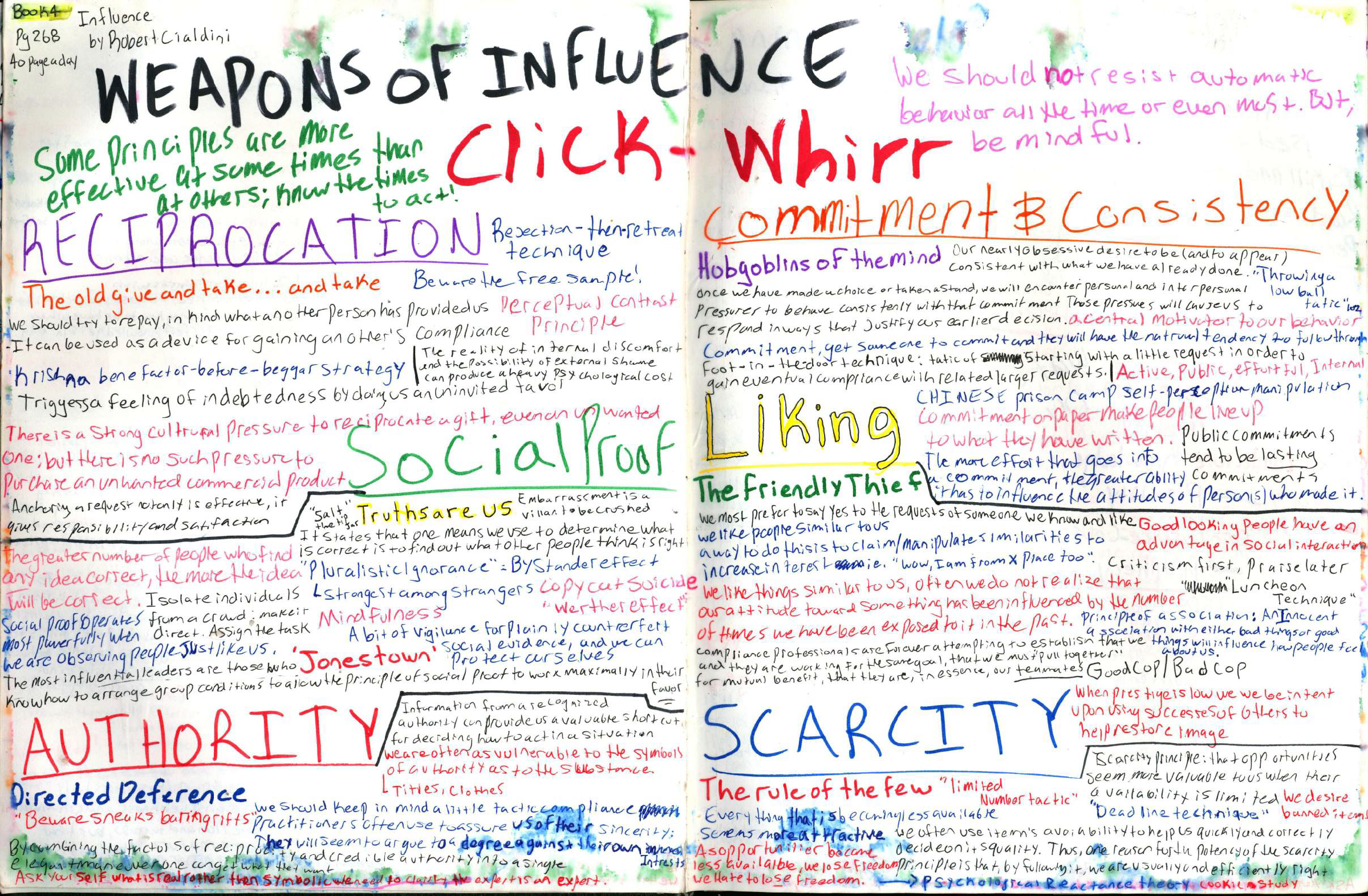 These are, I can never say it, reciprocity. I can’t even say the thing. Reciprocity. Sorry. Can’t spell. Can’t spell but I can talk. Reciprocity is basically the idea of that if you give something to someone, they feel obliged to return the favor. So, again, as a marketer, if you’re providing great content to people over time, you’ve given, so they will feel obliged to do something back for you. Obviously, they’re not stupid, but again, it’s building that know, like, and trust. So if you’re using reciprocity in your marketing, that you’ve given stuff, then it builds up all those good bonus points in your favor.

The second one is commitment and consistency.

Commitment and consistency can be described. Let me give you an example of it. Commitment and consistency, one of the examples I like to use for this is basically if you get someone to fill in a form, say on your website, it’s just one little section, and say, “Give me your email.” And then if you redirect them, say to another page, and ask two or three more questions, in many, many cases, and we found it in probably about 75% of cases that people will, once we started that process, then they’re quite happy to offer more information. If we boil that back one step further, what we’ve also found is, on most websites, for example, they will have a form, maybe first name, last name, and then a button underneath. Which everyone hates forms, let’s face it. So when we’ve tested this with just a button, so people would find out more. I know that’s not a very exciting title, but the generic idea is if you have something you want people to do, if you’ve got a button rather a form being displayed.

So let me show you that. An example is most people have a form and then a button here. If you just have a button to click, then once you’ve done that, that commitment and consistency kicks in to complete the form. With this method, people hate forms, so we have found that you can get probably 30, 40% more conversions by having a button that pops out in a form rather than a form displaying first.

So again, that’s how you use one example of commitment and consistency.

Again, people want to… They don’t want to be the first, generally, to do something. They want to follow in someone else’s path. So if you’ve got lots of social proof, testimonials, things like that about your products and services, good reviews, then that ticks the social proof box.

Liking, again, this is very much common sense. People want to deal with people they know, like, and trust. So you’ve got to come across as an affable person, someone they can relate to and is like them, that people don’t want to be talked down to. People want to deal with people who are similar to them, who’ve maybe made good and feel that they are aligned with them in their visions and values, that they can help them achieve their goals too.

Authority, number five, is basically authority is being the teacher. Doctors, dentists, lawyers are seen as authority figures. If you do, say, a webinar to your list or doing videos, things like that, because you’re teaching them, people immediately associate authority with you doing stuff like that. So again, really useful things to do.

Stack These Up For Even Greater Results

Same thing you could do is if you’re offering a bonus, you could say, “The first 50 people who act will get a certain bonus.” You could put a time scarcity on it, “You’ve got only 48 hours to do something.”

You could put a price increase after a certain times scale. So that’s how you use scarcity.

So, if you start using these in your marketing and a combination of them, maybe a few of these in your marketing, I’m sure you’re going to see a lot better results that you get. And if you’re to find out a little bit more about this, obviously it’s a really detailed book, definitely recommend it one on your reading list to read. As I say, I’ve read it about four or five times. Probably about five years ago was the first time I read it. It’s definitely worth reading if you want to find out the factors that influence people. And again, as I mentioned at the start of the video, this is not just relevant for business people. It’s relevant generally in life. If you need to influence people, then this is a great starting point for you to start with.

Hope you enjoyed the video?

Any comments, questions, please leave them. We’re happy to show you how we use influence with our clients and in our own business. Again, if you want to talk to us about anything, please select one of the buttons, not the forms. We tend to have buttons because we practice what we preach on our website. And someone will talk to you about how we can help you influence your audience.