Infusionsoft Consultant What Are Your Options

Are you looking for the right Infusionsoft consultant for your business?

In today's video I'm going to quickly go through the various options you could consider the pros and the cons of each one.

If you're considering hiring an Infusionsoft consultant or possibly doing it yourself, or maybe something somewhere in between. So on my whiteboard, I've done this little table, a simple little table.

Maybe you want to do some simple emails yourself and maybe outsourcing the more complex tasks to an Infusionsoft consultant.

Or the third option is where really, you don't want to be bothered at all with it. This is the done-for-you option. You may want to outsource the whole thing having an Infusionsoft consultant do all the Infusionsoft tasks for you.

What are the pros and cons of each one of those?

It's important to have an honest appraisal. Then you'll know exactly which one would work best for you and for your business.

If you're doing it DIY, the major disadvantage is time cost, which is high. It can take a considerable amount of time to learn Infusionsoft. There is often a pretty steep learning curve getting to grips with Infusionsoft.

Control, obviously at first the control is not there, but over time if you know how to do it yourself, then you know that's good. So, I'll put a tick there and then cost is obviously we'll put a $1 there.

Infusionsoft Consultant…Weighing Up Whats's Right For You

The third option, the done for you option is time is going to below. You know because you're not going to be doing any time. So that's just a … it's more of a tick now than an X.

There Is Always A Trade-Off Between Time & Money

Control, that is something, it's a bit of a both one, obviously, you're losing control but if you're handing that control to someone who you can trust, who can do the job for you, then that's a really good thing for you to do. The major disadvantage of going the done for you route is probably cost and that is the financial cost.

Now, one thing that business owners tend to totally ignore or don't weigh up in their calculations, is the opportunity cost. The time costs, now, which then serve many people. And I'm a prime example of this. When I first got Infusions, it's nearly 13 years now since I've had Infusionsoft and for the first five or six years, I didn't even open Infusionsoft. I had someone in my team do it for me. And you know, it was just too much and it's so much different now than it was a few years ago. So what I found is I hired someone to do it for me, who in hindsight probably wasn't the best person for the job.

And if you want to look at how to hire an Infusionsoft consultant, we've got another video which will show you some really good tips on how to hire an Infusionsoft consultant who's right for you and for your business. And I'll give you the link to that. But what I was finding was I was handing over this work to this person and it was taking so long to get done. So the opportunity cost, i.e. the lost revenues because I couldn't get something live was much, much worse than the actually cost of getting someone to do it. So, that's something, a really critical component you need to weigh up. You know, is it, it could be, so that's financial, but the opportunity is a very low one, opportunity cost. 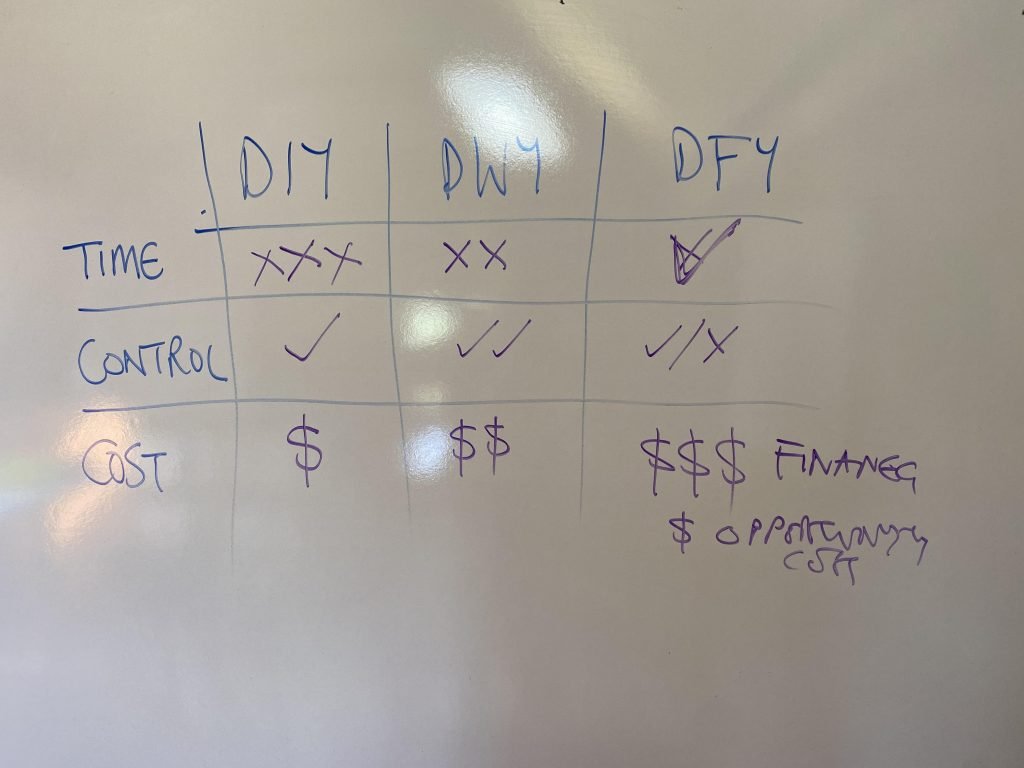