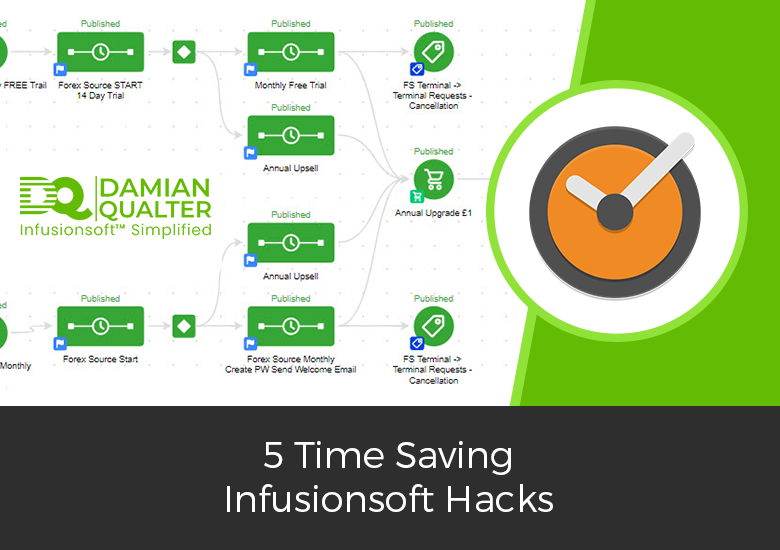 Like every other CRM or marketing automation software, Infusionsoft also has its hacks that will save you time, and make the whole experience of using it less stressful.

Here are 5 Time-Saving Infusionsoft Hacks to buy you some time.

You don’t want your campaign to be overcrowded, that is not a good concept. Everything needs space, so it can breathe and grow – Infusionsoft campaigns are no different.

Many builders repeat this kind of mistake, but there is a catch on how to avoid it.

You need to press “shift”, and while holding it click on the grid and move it. That way, Goals & Sequences of your campaign will be moved, and you can continue with the creation of your campaign, not being limited by the size of your browser.

Just be careful not to “snap-to” the grid, when rearranging positions of the elements.

Be sure to put them on the blank grid alignment, before you release the mouse.

Infusionsoft Hack #2 – A Smarter Way to Update Links in Emails

It can be a real hustle when you have to change links in a sequence of emails that you created for your campaign.

This is something that can happen too often, and the people of Infusionsoft realized that.

Because of that, they created a function called Campaign links, which allows you to change all the links at once.

Since the links in emails are dynamic, it is enough to change the link once. This is done in the Campaign links menu, and it will be changed in all the emails.

This function can be found in the main campaign window, in the Campaign menu. Other than this, you can also use this function to add text and other content to your links. This content is also dynamic, which means that its update or change will cause changes in all the sequence emails that include that content.

Once you created your Infusionsoft Campaign from scratch, every part, step by step, the last thing you want is to do it all over again. That’s why Infusionsoft developers have implemented an option to copy elements from existed campaigns into new ones.

All that is required to do this is to select and drag wanted elements into a new Campaign while holding Control key. That way all your Goal/Sequence setups will be implemented into it. The only catch in all this is that you’ll have to activate every single piece that you want to copy and take it out of the draft mode. But, that is still a much smaller problem than building the campaign right from scratch.

When you created a flow and a series of emails that suit your needs, you can implement them into other campaigns too. You don’t have to create them for each campaign, Infusionsoft allows you to copy them from one campaign into another.

That can be achieved by going into the menu and setting up a new Sequence. Then you should go to Edit, then to Sequence menu, where you should choose “Copy from campaign…” After that, you will be able to select the campaign in the Infusionsoft campaign builder where the wanted Sequence is located, and the name of that Sequence. Once you do that, all the parts will be copied in.

If you haven’t heard about the Infusionsoft Branding Center before, that’s no surprise – it is not a very popular tool, but it is very useful when you learn how to use it. The Branding Center stores all the default styles for your emails, webforms, etc.

Find this area in the Infusionsoft logo menu, in the Admin section – and voila! All of your application defaults will be there, and you can update them however you like. You can set your default quickly and easily by saving one of your campaign emails as a “Template”. When you edit the Branding Center email, go to the top menu “Email” and select “Copy from a template”. That’s it!

So there you are 5 Time Saving Infusionsoft Hacks.