How To Add Animated GIFS Into Infusionsoft Emails 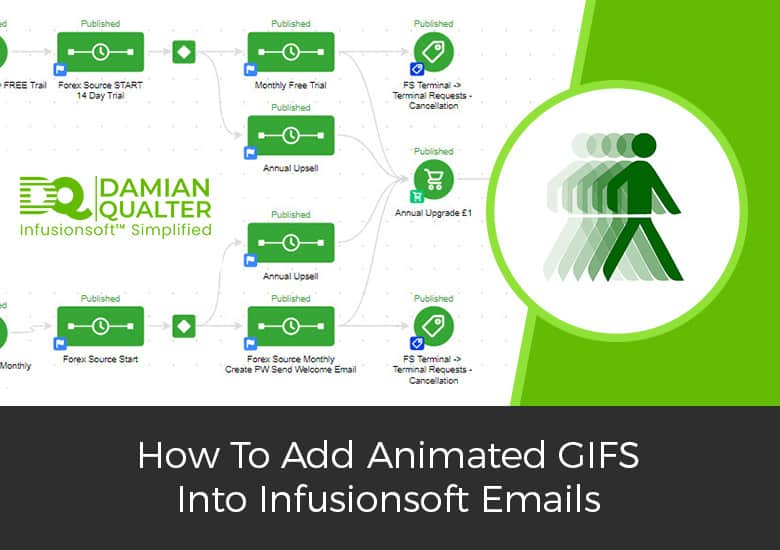 If you've ever wondered how to add animated GIFS into Infusionsoft emails you'll live this short video tutorial.

In today's video, I'm just going to show you how we create a pretty cool animated GIF that we can embed in our Infusionsoft email.

So it's really straightforward.

The massive advantage of this is we're going to use some free software too. You can do this using lots of other different software, which are usually paid for versions. The software I'm going to use is basically a software called Ezgif. And I'll just refresh this page now, and we'll start from scratch.

So I'm just going to grab a file, and we don't want massive files here, so we grab a file and we upload our video.

It's going to take a couple of secs just to upload the video.

And we want to create it as a video to GIF. Okay. We can see now that our video's uploaded. So what we want to do now is set a time scale where we want the video to start, our animated video to start. I'm going to put it on at, say, five seconds to 12 seconds. We only want a short video for the animated GIF.

So what I would suggest is have something which has got a lot of movement on it so it attracts people's eye to watch it. So we're going to now leave all these settings here. I've just selected these here. You can play around with it and try it a couple of times. But if you've got something where there's a lot of movement, then try and pick those times to use as your animated gifs.

Doesn't really matter what email it is. I'm going to use this one. And all we want to do is grab an image block out.

Let's put it just above the button. There we go.

We're going to browse now for our emoji, and we're going to upload that. So I'm just going to rename that in this because I've got a few of them of the same name, so it's emoji two.

So I'm going to upload that now, and we can see that's worked great. You can resize it on the right here if you want to make it just a bit bigger.

Let's just send ourselves a test now to see how that looks in the email.

So I'm just going to send that.

And here we go. This is our email. And we can see that's worked perfectly now.

Don't Forget To Test It!!

So basically all you need to do is have your video ready, upload it to the EZgif.com.

Select the time you want, create the animated GIF.

I hope you enjoyed that video and found it useful?

One thing I'd also suggest trying with these is to try putting emojis in your email subject line as well.

We found great open rates, improvements in open rates by using them. So hope you enjoyed the video. Any questions, comments, please let us know.