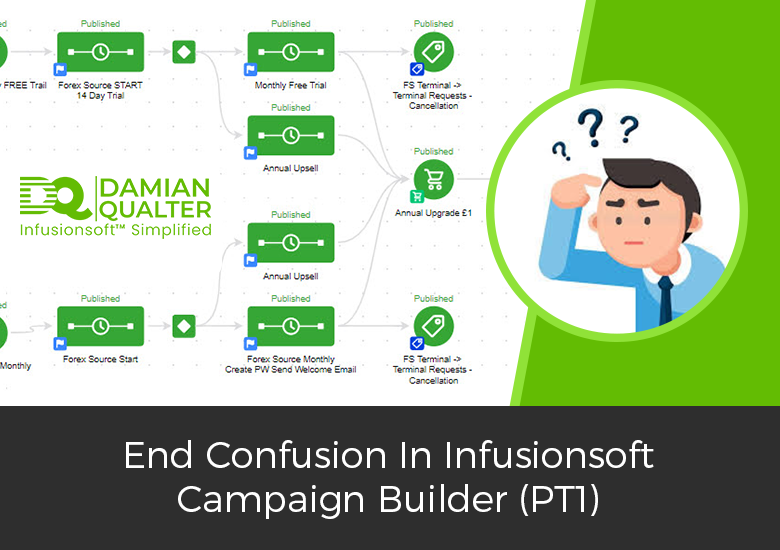 End Confusion in Infusionsoft! We’ve all heard Infusionsoft referred to as ‘Confusionsoft’. As you build out any new Infusionsoft campaign, it’s easy to become confused about which campaigns are supposed to do what.

Fortunately, Infusionsoft doesn’t have to be confusing. In this series, we’ll be looking at simple steps you can take to avoid confusing yourself.

1. Use A Larger Number Of Smaller Campaigns Inside Your Infusionsoft App

The Infusionsoft campaign canvas technically goes on forever. It’s possible to run your entire marketing from a single, giant campaign.

(I know because I used to do this!)

The first is that problems with a campaign become difficult to diagnose. The second is that bigger campaigns are more complicated, harder to explain, and therefore more confusing.

In my opinion, each Infusionsoft campaign you create should have one single objective or outcome. Perhaps you’re encouraging your customers to buy a particular product. Once they buy the product, you might then need to deliver the product, and educate the customer on how to use the product.

Rather than doing everything in a giant campaign, it’s best to split things up into two or three campaigns. Potentially you could have:

The downside of using smaller campaigns is you simply have more of them, and after a while this can become unwieldy. As your Infusionsoft campaign list grows, it’s essential to group campaigns into categories.

Then you can create your campaigns in Marketing Settings > Campaign Categories.

Next, you can then assign a campaign to a category from the ‘actions’ menu (within the campaign).

On the campaign screen, you can then filter your campaign list to only show a particular category.

3. Name Your Infusionsoft Campaigns In A Non-Cryptic Way

Maintaining a clear, consistent campaign naming convention is essential if you want to keep your sanity in Infusionsoft. When you look at a campaign name, it should be immediately obvious what the campaign is supposed to do.

When I want to see a list of all campaigns involved in the sale and delivery of Product A, I just have to search for ‘Product A’ on the campaign screen.

If I hadn’t maintained a consistent naming syntax, I wouldn’t be able to filter campaigns in this way. Notice also how clear each campaign name is. You know immediately what you can expect to find in each campaign.

When you drag items out onto the campaign canvas, Infusionsoft gives each goal and sequence an ambiguous default name. Things like ‘Web Form submitted’, or ‘Untitled Sequence’.

Most Infusionsoft users do not pay sufficient attention to how their goals and sequences are named. It’s common for example for a web form goal to be left as ‘Web Form submitted’. The question is, which web-form?

Remember that goals in Infusionsoft always look back in time, and explain something that happened in the past. Hence the goal name is ‘web form submitted’. Sequences then look forward, at what needs to happen in the future. You might for example have:

Notice how that’s already better than the defaults. Just by looking at the goal and sequence names, we know exactly what happened to trigger the goal, and what we can expect to find in the sequence.

5. Use Plenty Of Notes On Your Infusionsoft Campaign Builder Canvas

Leave yourself a few clues, and make extensive use of campaign notes. They’ll be useful to yourself, to your employees, and to external consultants if you ever decide to get help with your campaigns.