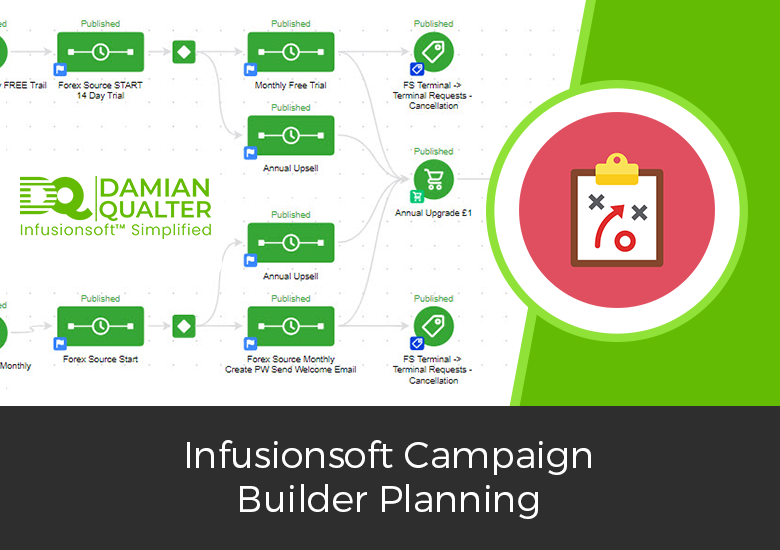 In today's video, I want to just whiteboard the Infusionsoft Campaign Builder Planning process and show one of the biggest mistakes and biggest struggling box and frustrations people have when they're mapping out their Infusionsoft campaigns.

Now the first thing which most people get wrong is they go straight into the Infusionsoft Campaign Builder and try building it out there. And really, unless you've got a lot of experience within the Campaign Builder and Infusionsoft, I would leave that till towards the end when you've finally thought what the path is of what you want to do for your particular sales funnel. Because once you're in Campaign Builder, you can get just lost with moving backwards and forwards and putting all the pieces together. So what I generally say to people is go old school. Do you know?

I'll do it, I'll leave it a few hours, and come back to it. Because there are things that maybe I've missed or not thought about, and sometimes you need that time to process what you're trying to do. So what I always find the biggest issue is, is people don't know what the contingencies are, or don't take the contingencies into account when they're building a campaign, or I don't quite understand it. So you've got to think of what the end goal of the campaign.

Now I'm not saying they're the price points you should use; they're not. I think they're … I don't like cheap products, but that's another story.

So how do we get to that stage? The route of least resistance would be … This is our sequence, and people opt-in, they get our emails, which would be a series of emails … I'm just going to base it on the emails now but I think everyone who knows me or has watched my videos before … I'm a huge proponent of using multimedia channels for your marketing. I just want to make this simple just to set an example. Basically, they would come over here, and they would buy, and then they would buy again. It's a very linear process. Great. Unfortunately, we're dealing with human beings who don't make linear arguments, don't make linear …

Let's Break This Down A Bit 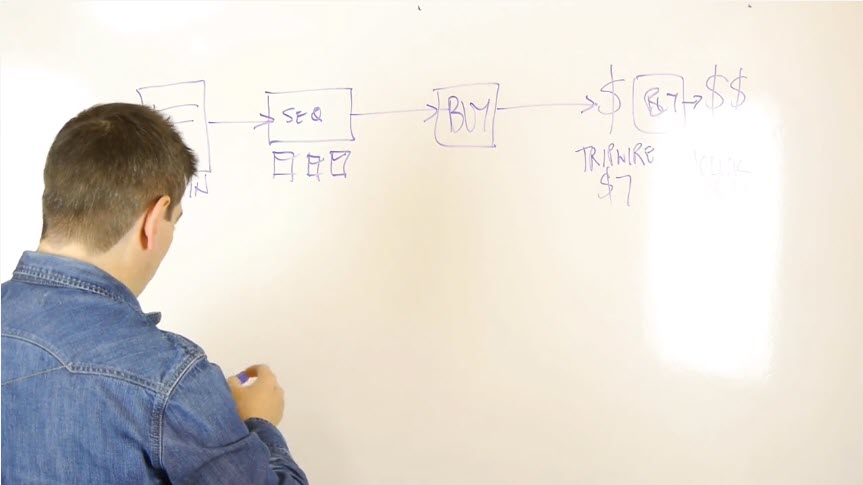 In the first situation they come up to here and the don't buy. therefore,  it's a “No.” Let's put a “No” here.

What Do We Do In That Situation?

Again, it might go up here. We've got to think of all those scenarios.

What do we do if you don't buy the one-click upsell?

So it's, “No, not bought the one-click upsell,” we then e could send a series of emails to them.

Here's How That Could Look 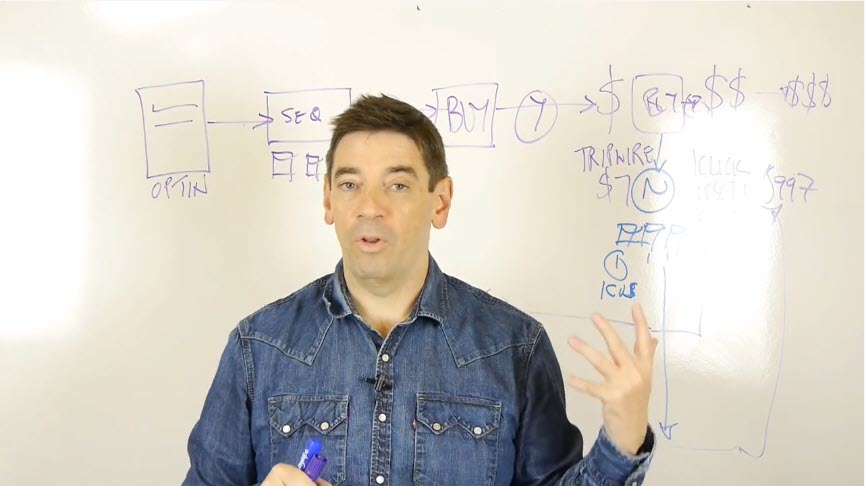 So can you see how this could be quite complicated? People don't take linear actions. And it's very important that you think through strategically the outcomes you may want for your particular sales funnel before you actually build it in Infusionsoft because if you do it the other way where you build it in Infusionsoft, I think there's a lot of restrictions how you think.

So I really love to map it out, very rough style like this; as I say, leave it, come back to it, and then have a look at it again. And then once we've done that, we would go into Campaign Builder and then we'd just build sequences, blank sequences with goals, contingencies, with if they don't take the action, and layer it up like that, rather than trying to do it all in Infusionsoft straight away, which is not flexible enough in my mind.

Great. If you can do it that way in Infusionsoft, that's brilliant.

But I've found when I've worked with lots and lots of different clients, they're all trying to do it in Infusionsoft, and they're not really thinking through the process, that they are constrained by Infusionsoft's Campaign Builder rather than what's between these two ears. Do you know? When you're on a white piece of paper, or a whiteboard, something like this, it's a lot easier and flexible to be creative, to design exactly what you want from your Campaign Builder campaigns and your sales funnel.

So hope you enjoyed that. If at any point you would like help with the Infusionsoft Campaign Builder Planning process or anything Infusionsoft-related, then me and my team would be absolutely delighted to speak to you. We've helped literally hundreds of other business owners get a lot more from Infusionsoft, and we'd like to help you if you're struggling or need something for your own Infusionsoft app. We would be delighted to speak with you.

So again if that sounds like something of interest, there are buttons, links, around this video somewhere. I'm not sure where; it depends where the videos are going to be when I've recorded it. But you'll find, on this page, links to get in touch with us and potentially book some sort of call with myself and my team, a free call to see how we could help you with Infusionsoft, and I know other things such as webinars, membership sites, Facebook ads, all those types of things.

I hope you now appreciate how important Infusionsoft Campaign Builder planning is to your success.

We really enjoy helping people so, as I say, if you want any help with any of those things, please feel free to reach out to myself or my team, soon.