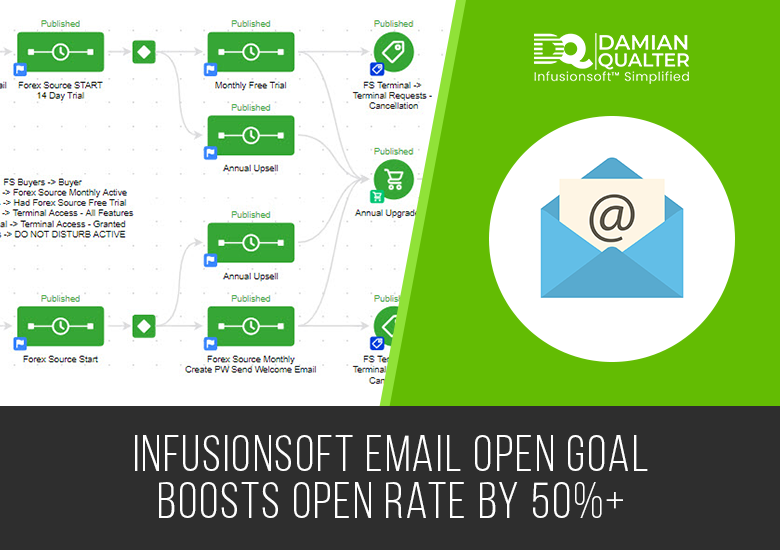 I'm going to show you how we're using the Infusionsoft Email Open Goal, Infusionsoft's new email open goal feature. It's quite new. It's been around for a couple of months and we're finding some really good uses for it to help improve our open rates of emails.

And I just want to show you one quick example here of how we're using the Infusionsoft Email Open Goal in a simple campaign. And then I'm going to show you some actual results of real campaigns of the statistics that we've got by using this method.

How To Use The New Infusionsoft Email Opened Goal

So basically how you could set this up is have a series of emails within a sequence and set the goal here. We've dragged the email open goal over here. And we could set it up that either that all the emails in this sequence here are opened. Or just any one of the emails are opened.

A great use for this is if you're sending say an invite or a newsletter and you want to have a second chance of sending it to people who've not opened it on the first time.

And what we found with emails is, generally with users for a lot of my clients, is, we have people who will open their emails possibly in the week, in the morning. And then we have another tranche of people who tend to look at their emails over the weekend. So what we've been testing is sending out an email early morning and then resending it on a Saturday morning about 11 o'clock to those who don't open it. So it's very, very straightforward to set up.

This Is Soooo Simple & Effective…

If you were setting up this campaign, I've just put dummy placeholders in here, but at the end of the sequence, if for example, you wanted them to move to the next part of the sequence, you would just have them drop down here to the not opened emails and then possibly go up into the next sequence.

So anyone who opens the emails will be triggered over here. And they could go, people who don't open could go into here as well. So you could have different sequences depending on what your goal is. So I just want to go to one of my … this is a real-life campaign. This is a webinar we're doing at the moment. And I just want to share you with some results.

So just to give you a little bit of a background, we're sending out a webinar invite to a list and the invite has been going out over three weeks. Because at time of recording, it's August, and we felt that if we left the window, the runway of inviting people too short, then because of the holiday period, we might not get as good a show up as we wanted.

So working with the client, we decided to do a longer launch to the webinar to get as many people as we can to register. So basically we sent three emails to the list. We sent an A email, which used to go on a Wednesday in the morning. And then a B email, which went to anyone who'd not opened that email and not opted-in. Obviously, if anyone had opted in, we wouldn't send them any more of the emails. And then we would send the one on Saturday morning to those who have unopened.

So I'm just going to share that with you now some of the results. I'm just going to zoom in a bit on the screen here. So we started with email 1A, and this list is about 30,000 people. And we sent email 1A Wednesday morning, we got 7500 people opening it. And then on Saturday, we got virtually 50% again opening that email.

Now obviously with email, the life of an email is very, very short. So this method definitely gets a lot more people to opt-in. And obviously, as I go through these results you can see the sort of results we've got. So we've got 50% more people, 50% of people opening the second email. So combined we had 10,500 people open the email. And the email list size about 30,000. so that's over 30%, about a third of the people opened it.

The second email did the same thing, roughly the same amount of people opened the Wednesday email. But what we found now is the Saturday email got a lot more exposure. Instead of it being 50% of the original, it was actually probably 50% more of the original this time. So we got 10,500, so we've got just over 17,000 people there. And that was over 50% of people opened that email combined.

Resulted In A Boost Over 61% In Webinar Registrations

And then we've just recently run a second email this week. Again, 5000 people. Obviously, a lot of people are registered for the webinar. We've got about 3000 people registered for this particular webinar. So people are dwindling out of the lists because they're signing up for the webinar. And again, the strange result is the Saturday webinar has had a higher response than the first. So the combined open rates are about 30 odd per cent here. Where we would probably be getting somewhere 20% open rates.

We're getting at least 50% more people opening our emails by doing this.

Now obviously like anything, you need to test this in your own business, see if the Infusionsoft Email Open Goal works for you, but it's a really, really effective way, and this is just one use of it, and there are lots of other uses of it, to get more people to open your email by sending it out to unopened people maybe a couple of days later. Maybe at a different time. Test this, it's worked really, really well for my clients. And I'm sure it can really work well for you too.