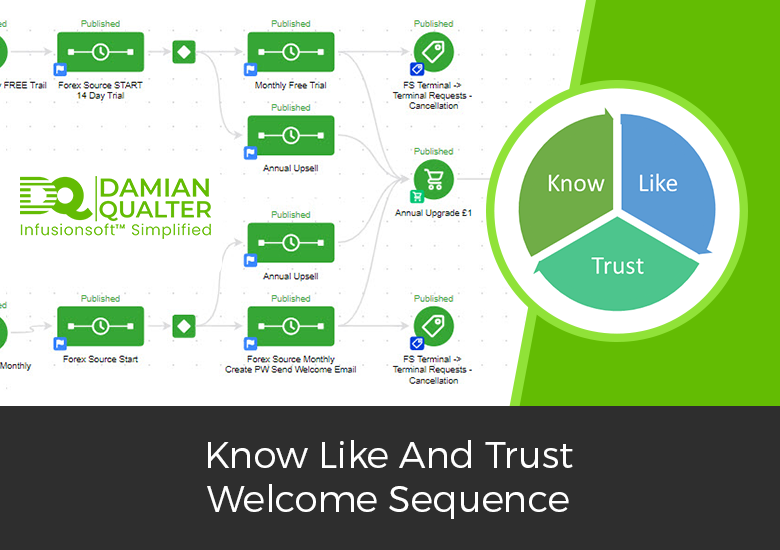 Hi, Damian Qualter here and welcome back to another video wherein today’s video which is the Know Like And Trust Sequence.

But before I do I’m going to share with you a secret. It’s something that we found really, really effective, is how to create the perfect welcome email series.

So first, if you don’t quite know what a welcome email series is, whenever someone opts into your sales funnels for one of your lead magnets, what we want to do at the same time is a trigger if they’ve never received this sequence before, it’s a series of three emails, generally, I use three, you can go up to five, but I think three is more than adequate, of emails that each have a specific purpose to help your new prospect to know, like, and trust you. And it is incredibly effective to use in your strategy.

So, we have three emails. And I’ll sort of go a little bit more of the strategy, how you would set this up as well. But basically, the first email is what we call the Know email. And this would be more what you do and how you do it and your U S P. So, it’s really telling the user about, let’s say you’re a Facebook’s ad person, it’d be sort of we help small businesses, chiropractics, let’s say it’s a very specialist, we help chiropractors generate new leads using the Facebook apps where we do this in a specific way where we target local clients to come into the stores and generate five leads a day for chiropractors. Something very specific of what you do, and again, you want to go into the features and benefits.

Now, again, talked about this in earlier emails and videos, features are the things that it doors, benefits are the effect that the result gives you. So again, many people focus on the features rather than the benefits, but it’s equally important that you try and explain both in your text, this is obviously an email. So, let’s say in here what you do. I help chiropractors grow their practice. That’s a feature. So, the benefit could be using Facebook we help you generate five leads per day to fill your booking calendar solid, something like that. That’s the benefit.

So again, let’s think of another example.

If I was a realtor, for example, it will be how to get your new listing in front of a thousand new prospects every single day. So, that’s the feature, the benefit will be selling your house, sell the property in less than seven days, something like that. So, that’s just the example. I’m just thinking of these literally off the top of my head.

Excuse me if I’m thinking them through when I’m doing these with you.

The Know one would go immediately on day zero. And I would generally have this a little bit stalled after the lead magnet, the going in and I’m just going to show you how that would work a little bit later on.

Next one is Like. And this is about you and it’s personal because basically, people want to work with other people and they want to work with people they know, like, and trust and like is revealing something about you the person, not you the business owner who can do this all for them. It’s really about you. Let’s give you some examples. It could be, “Hi, I’m Damian Qualter. I love peanut butter, but I hate Marmite. I’m a bit OCD about things.” I’m just trying to think, live sometimes it’s quite hard, just doing this literally live. So, it could be anything about you.

Reveal some personal stuff, not too personal, but also say some of your weaknesses. Obviously, your weaknesses don’t want to detract from what you’re offering. So, you wouldn’t want to say my weaknesses is I’m crap at Facebook ads if you’re selling a Facebook ads course. But it could be I find it hard to show off sometimes. I’m constantly working. My mind is constantly thinking. So, show the real you, the good side and the bad side. It’s really, really important that you balance it out so that the people can associate with you that you’re a real person.

Reveal the “Real” You!

Finally, the Trust side of this. This is things like testimonials, case studies, oops case studies. But again, I see so many marketers, so many business owners not doing this justice, this section.

They might just go, hey, Bill had a great result. He sold his house in seven days. Yeah, that’s okay, it’s a testimonial, but thinking in your prospects mind’s eye, will they really believe that?

Anyone could say that. So, what we tend to do and what’s worked really, really well with clients is if you’ve got anything on Facebook or if you can screenshot anything which is proof, it might be an email, might be a text message, something like that, if you can screen cap it and put it in the email or redirect people to a page with testimonials on, then that’s far more effective.

Now again, testimonials use things like Facebook ads. People really relate to the look and feel of a Facebook ad, sorry, Facebook posts, not ads, if people have posted on Facebook saying good things about your products and services. Again with SMS, if you had SMS testimonials, praise from your clients, use those. Just screencap it and use them in the email. It looks really good when you put them there, it mixes things up, it’s very visual rather than all text-based testimonials, which sometimes are not really believed. If you think about it, yeah, hopefully, you are thinking about it.

That’s the theory of it.

So, we’re going to use know, like, and trust.

What we would do is basically we have our opt-in here.

Opt-in and a couple of ways we can do that. So people, some of them would opt-in and then they get them whatever it was their lead magnet here, whatever they’ve opted to do. So, you could either redirect them to that page where they can download it or send them an email where they can download it or the email’s got the actual thing in it. I would leave a delay. Possibly for two hours. And then you kickstart the Know email, then a day after the Like email and then the day after, the final day, we send the Trust email.

So, if you’re using a CRM like InfusionSoft, then basically, what you want to do is you want to set it up in a way that, where can I put this? Here. So, when someone’s opted-in, this will be your form. They come in here, you have a sequence.

This is where you maybe apply your tags, deliver the original email and then you would have a decision diamond that goes, they’ve had it before, yes or no?

If they’ve had it before, obviously, it wouldn’t trigger the emails. If it’s no, then it would trigger this sequence.

So, the first time they go through the Know Like And Trust Welcome Sequence, you would apply a tag into here, which is started the sequence, started Know, Like and Trust. So, when it comes up here, you will base it off your decision diamond on tags. If they have started before, then you would shift them down here. If you don’t have it, then you would shift them to the top. So, that’s how you would do it in Infusion Soft. Very, very effective. Leave a little bit of delay with it.

Have some fun with these as well.

Be yourself in them, it’s so important.

I see so many people using emails who it’s incredibly boring.

They don’t reveal the real person. People buy into you as a person.

Generally, people are bored and they want to know, like and trust you.

It’s like the soap operas, reality TV shows, why are they so popular? Because people want to be almost voyeuristic in other people’s lives.

So, hope you enjoyed today’s video on the theory behind the Know Like And Trust Welcome Sequence

Do you want any help implementing any of this stuff?

Whatever it might be, please reach out to us. Again, buttons, wherever they may be.

We’d love to talk to you and help you get more out of your marketing.