Do You Make These Mistakes With Infusionsoft Opportunities? 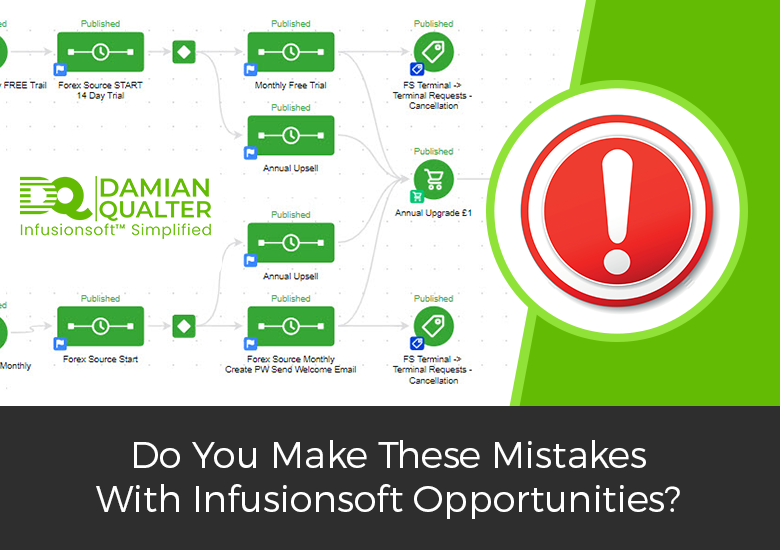 Are you making these same mistakes with Infusionsoft opportunities?

Several years ago I set up my first opportunity pipeline in Infusionsoft. In my head, the sales pipeline stages were going to be simple.

New prospects would book a meeting with me through my assistant. After up to two web meetings I would send the prospect a proposal. After the proposal, I would address any objections and on-board the client.

It became obvious very quickly that things were not running as anticipated.

One lead, whom I had previously sent a proposal, had to be moved back to the meeting stage. One day he sent me a confusing email.

“Damian, we have a meeting this Friday, but you have just sent me a reminder to respond to your proposal. I thought we had shelved that???”

(Any time a prospect uses multiple question marks in a single sentence is a bad sign, in my book).

My apparent fool proof pipeline was already faltering, with only me and my assistant working in it. There were mistakes with Infusionsoft opportunities.

‘Nobody Knew What Was Going On’…

A month later I took on a new Infusionsoft client. My client was already making extensive use of opportunities. When he first came to me he looked on the edge of a nervous breakdown.

I couldn’t see it at the time, but many of the warning signs from my pipeline were in plain sight.

The client had a linear pipeline campaign in the Infusionsoft campaign builder.

Even though strict instructions were provided to sales staff to only ever move a prospect down the pipeline, contacts were routinely moved up and down the different stages.

One prospect was active in every single sequence in the opportunity campaign. The contact was receiving a barrage of conflicting reminder emails, with all sorts of tasks being created for the sales reps to complete.

Nobody knew what was going on, or really how many opportunities were truly active at a given point in time.

Part of the confusion came from the naming of the opportunity stage descriptions.

One pipeline stage would be called ‘qualify prospect’.

Another would be called ‘proposal sent’.

Do you see the problem with that?

One looks forward at the task to be done (qualify prospect), the other looks back at the task that has been done (proposal sent). What came next? Nobody knew!

The next problem was the task notifications.

One task in the ambiguously-named ‘negotiating’ stage simply said: “call prospect three times”. “Three times in what time period?” I asked the client. “Are they supposed to leave a message if they don’t get through? Also, should that be three tasks, not one task?”

My client had 350 ‘active’ opportunities in his pipeline allocated across seven sales reps. Sixty-percent of these opportunities were locked in a stage called ‘delayed’.

We later discovered that any leads that failed to close immediately were moved to ‘delayed’ to prevent the opportunity being closed and allocated to a new rep.

Sales reps would hoard cold leads in the delayed stage to prevent them from ever being allocated to anyone else.

So where exactly did they make mistakes with Infusionsoft Opportunities?

If you too make mistakes with Infusionsoft opportunities, I would like to show you how to fix them. Why not schedule a FREE Infusionsoft Audit call?

If you use Infusionsoft AND have an offline sales process involving real meetings with real people, you should attend.

P.S. Did the story above resonate with your experience?