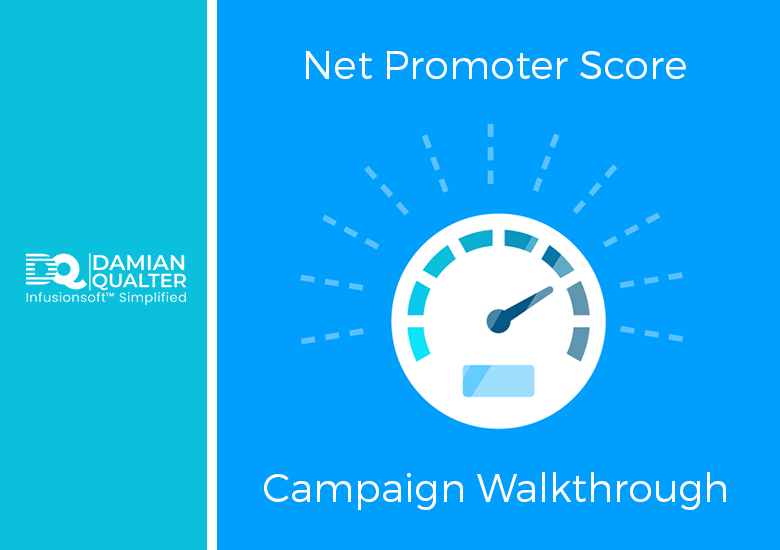 I want to demonstrate how to create a net promoter score using Infusionsoft.

And these are really useful if you've got any sort of paid program where you've got customers either during the program or at the end of the program trying to find out who enjoys your training or product services and where there is an issue. And it's got a two problem sort of benefit this that obviously if you've got people who are delighted, it's good to know who they are and they're the people who you can then make an outreach to potentially give you testimonials.

And if people do possibly not have the best experience they feel they should have had then it gives you another opportunity to reach out to them and try and put that right.

So there's a couple of ways we could do this.

And this will basically allow us to pull the data through without having to ask our clients to fill in their email again. So it will get us a much better conversion rate because we're making it easy for people. So what we need to do now is I want to create a custom field with the dropdown for the net promoter score. And you can have net promoter scores one to 10 I'm just going to do it very, very simply now, that is one to five.

Again, you could do this in lots of different ways to make this look a little bit neater. Firstly, I'll just get rid of some of the formatting on that page and we're just going to turn that now from draft to ready. This is our NPS score and connects it here and basically what we want to do is we want to now create a decision diamond. Next, we want to add a rule, so if our contacts, custom fields, NPS,  equals five or four. 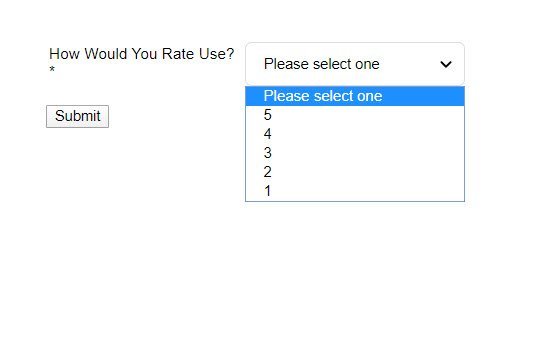 And then we go through our net promoter score here so we want to add our contacts. Then, if they are a 3,2 or 1 they go a different route in the decision diamond. Okay. So let's just put a domain email in here.  Now I'll quickly change the text in here really, so that's NPS four to five, so they're happy people and then we're going to just put not happy people in here.

So NPS one to three, grab a template, NPS not happy. Okay, let's get that going and then here we just have an emergency because we can put a tag in here to say that they've completed the score. Or something else just to measure that so started NPS. So let's just make that public.

Then what we want to do is just make one little edit here, before the form we will ask this is where we're going to put an email in to get them to complete the NPS for. So complete NPS. Okay, so we're going to put another email in here, drag an email out, doesn't matter what template they are. Let's just use one with a button in and we'll call this completed NPS.

Here we're going to put the form in so we go to a web form, NPS score, not… Well, basically we'll have the net promoter score (NPS) in, the core is the actual form itself so let's just publish that in there. Go back to edit and what we want to do now is let's just get a contact and drop them into this campaign.

So I want to find a contact under my contacts, let's just find one, so let's put this one in and what I'm going to is start-stop a campaign sequence. NPS and wanting to drop them to the sequence so let's process that action now. In a second then we should get an email sent to us to complete the NPS score. So I'm just going to pause the video while we wait for that to come through.

Here we go, we've got our complete NPS one. So again, just excuse the email here, we're just using this for a bit of a test and we're going to click that and it should go through to our form. 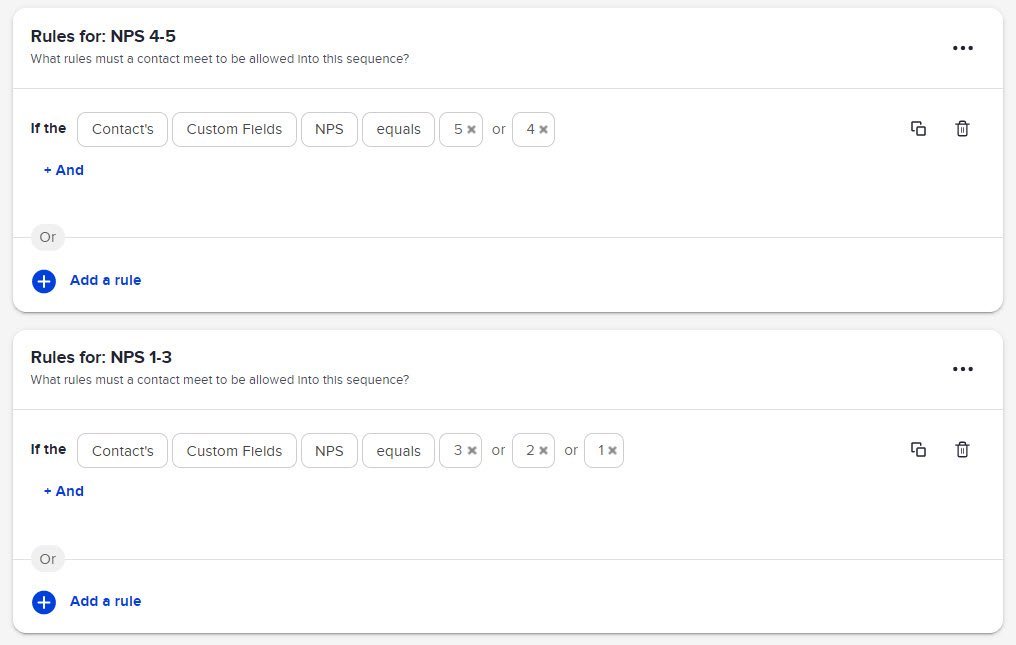 Again, I've not styled this at all so don't worry I'm just talking more about functionality so you can see it and let's rate it a four. Okay and again, you can put a nicer thank you page in there but we're talking about functionality.

Let's just go back into our campaign now and our lead should come into here now so let's just refresh this.  What you could do then now to sort of obviously make this campaign a little bit more thorough, is in this one when anyone's completed a four to five, you could have, say a task for one of your team to reach out to them and see if they want to basically do a testimonial. 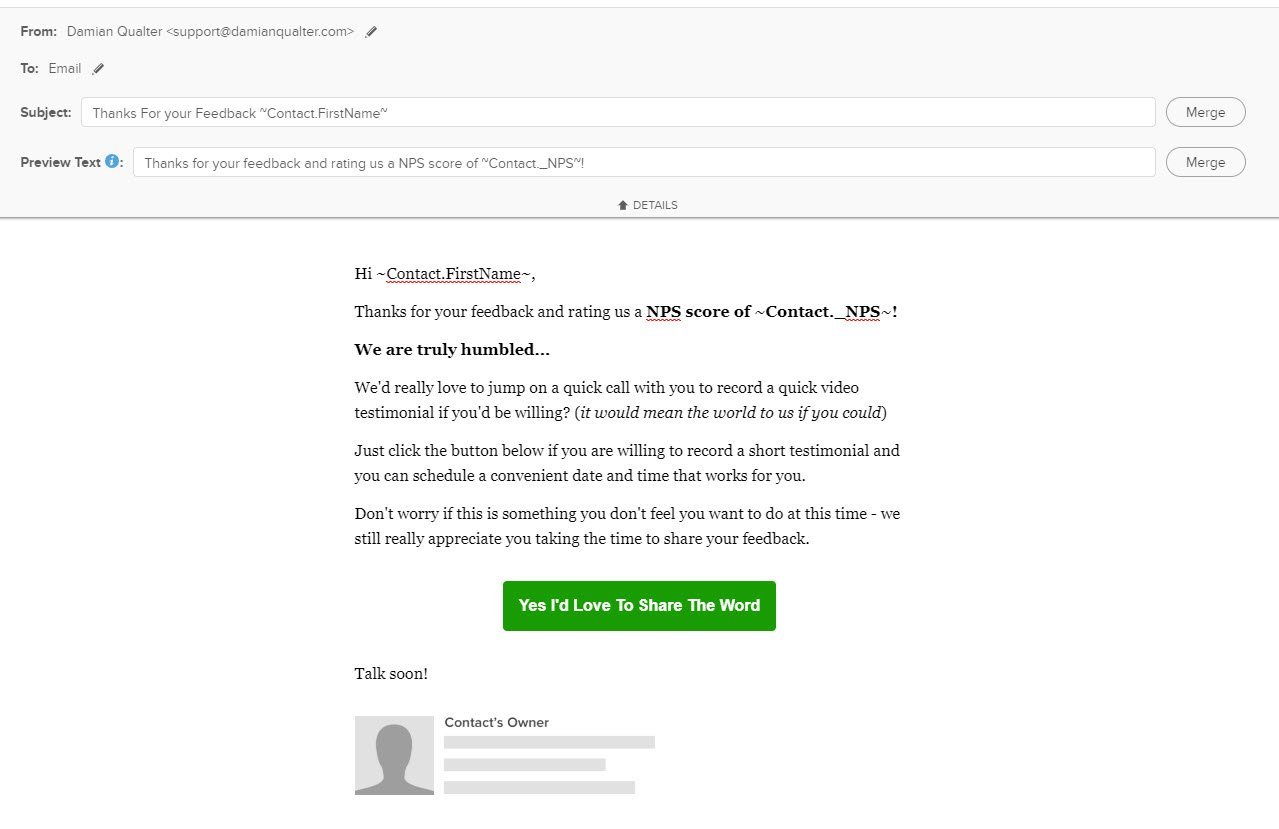 I would also have an email which goes out to them which says like, “Hey, thanks. Really appreciate your feedback,” and you could then have a link to an appointment for one of your team to reach out to them and do an appointment. And if you go to say one to three again, you might want to split these out a little bit further.

Got a one and two at the bottom, something like that using a decision diamond. 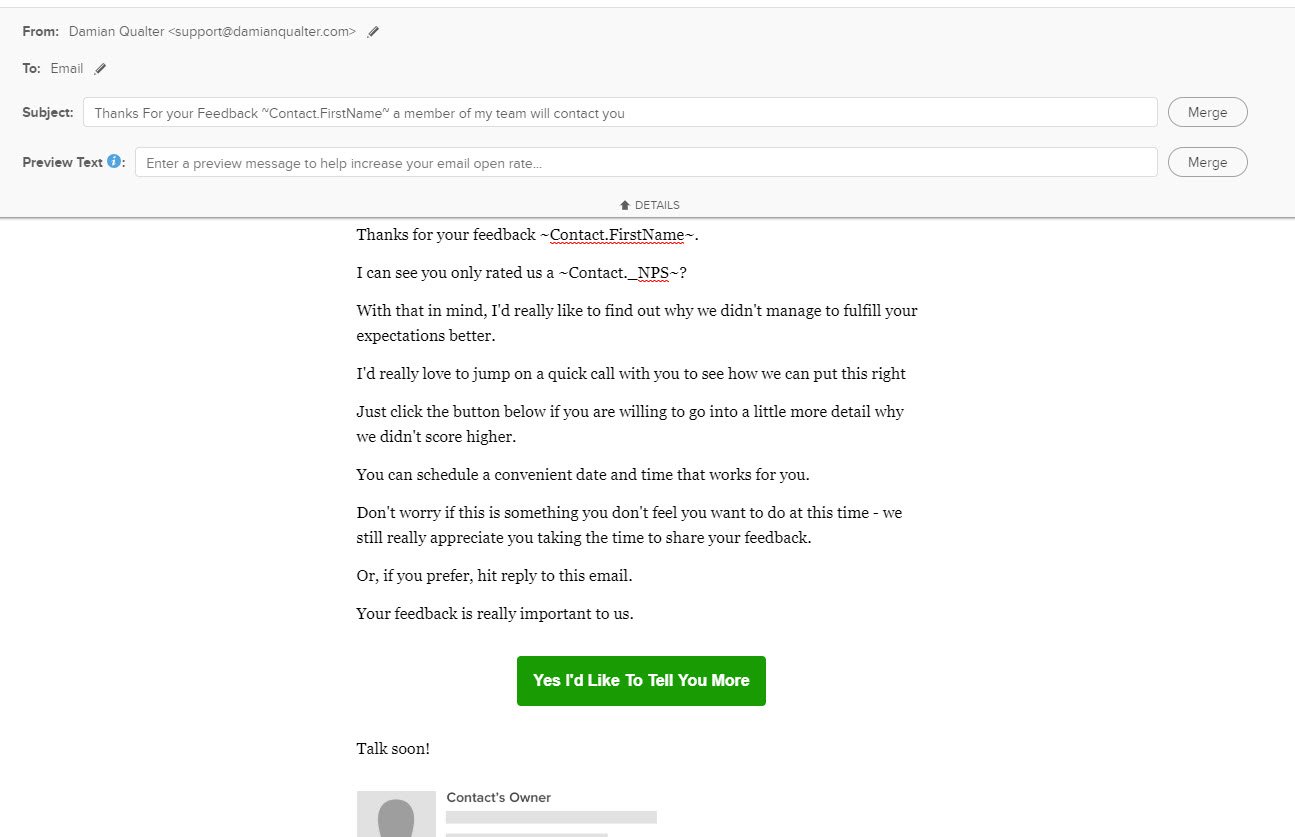 For them, really you need someone again in your team to reach out to these people and find out exactly what was the problem.

Try and rectify it to regain some of the goodwill that's been lost obviously, that your customer now is feeding back to you. So that's a really simple net promoter score.

This Ia A Fairly Basic Net Promoter Score Set Up

I'm going to create another tutorial with one a bit more complex than this probably a lot nicer to do. But obviously a little bit more complicated to complete but hope you enjoyed that.

I will be using this in any campaign, any sort of feedback when someone's bought a product from you, you've completed a job, when someone's completed a course or training. Definitely have a net promoter score going out to people to get feedback because it's a really, really untapped source of getting great testimonials.

Need help implementing this into Infusionsoft?