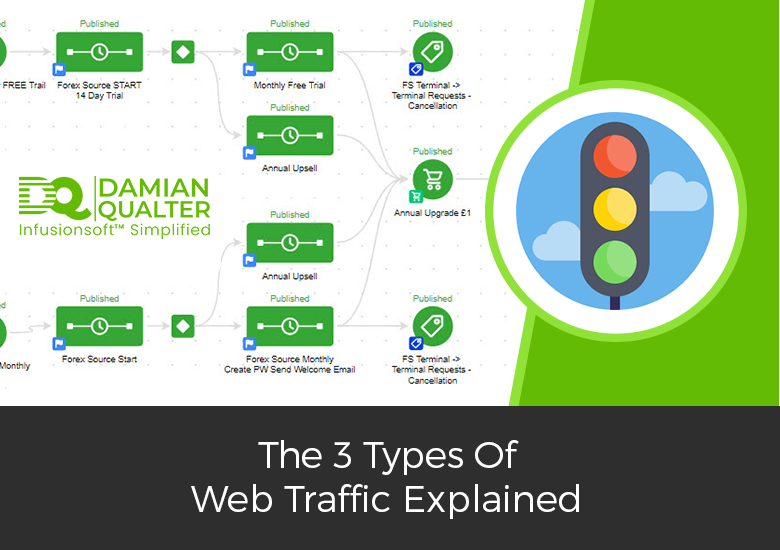 In today’s video, I’m going to be sharing with you the three types of web traffic that are available to you, and how you can use them and where they come from.

So I’m not really getting into specifics of things like Facebook ads, Google, anything like that. I’m just going to go strategically, the three types of traffic because they are very, very different. And ultimately you really want to try and move to one source. I’m going to explain the three sources and the source you want to try and move to once you get going. So you’ve got traffic that you control, you’ve got traffic that you don’t control and then traffic that you own. So let’s go into these three types of traffic and how you can use them and what their advantages and disadvantages are.

As Infusionsoft users, we want to try and get them to opt-in to our email list.

The Three Types Of Web Traffic…

So traffic you control are things like PPC, Facebook Pixel, retargeting audience. So they’re the main sort of sources we can do and they are really things that you can buy or you’ve bought that you can leverage to target something more directly to an outcome. And Facebook Pixels can come into this class as do Facebook audiences as well. But ultimately because they’re on a third-party platform, you don’t really own those resources. Because if Facebook closes you down tomorrow, they aren’t really your traffic and you would lose all those traffic sources.

So traffic you don’t control are things like SEO, social media, that could be things like LinkedIn, Twitter. Anything like that which you’ve got some control over because, so let’s say, for example, SEO, you want to rank for certain keywords but it’s not fully under your control. So you can’t define if you’re going to get someone to visit a page from a specific keyword search, as you would in the control section here. So again, this is probably the third and least effective, not saying effective, a traffic source that you have.

The next one of the three types of web traffic is the traffic you control.

And ultimately the best one is really traffic you own. And that would be really your email list, Infusionsoft CRM database, anything like that, that is under your control. So ultimately what we want to do is we want to try and push two and three into here. So ultimately everything we do, which is things like pay-per-click, pixels, audiences, we are moving them or trying to get them to things like opt-in to our list so we can get them in one. Again, with SEO, social media, we want to try and move them over to get them opting-in. And then we can really send out emails whenever we want to them. So we’ve got effective control over and own that audience.

So they’re the three sources. Hope it gives you some ideas, and if you starting in business, I would say that the ones that you really want to start with, especially if you’ve got no list of your own, start building your list. This is the quickest way of doing it, but you will pay for it. SEO, social media is good, but I think like a sales strategy, it’s a very long-term play.

SEO Is a Long-Term Play

Though ultimately, if you’re consistent with it and you’re doing it for 6, 12 months, you will get some results. I don’t think they’re going to be as good as that and certainly not as good as this, but you’ve got to start somewhere.

So we get lots of clients who have a list and they want to do better with the list. So what would we do with traffic we own? We would really, the main things we want to do with any traffic we own is we want to segment it and engage it. So this would mean basically our list. We might have a list of small business owners for example. So we want to really start now when we’re doing any marketing efforts to tag them. Again, if we’re using a CRM, like Infusionsoft, we’d want to tag them. Say if they clicked a link to something about Facebook ads, we’d want to tag them if they’re interested in webinars. So all the time we’ve got our list here and then we’re building sub-lists off the bottom.

Move Traffic To Sources You Own

We can ultimately segment those people and bring much higher engagement. So many people will just blast the list all the time with the same old stuff and they’re not targeting to defined audiences within their list. If you start doing that, I guarantee you’re going to have a lot better results with your marketing efforts. If you want to talk to us about any of the sorts of strategies, how you can start implementing, maximizing for your own business, please click one of the buttons or links somewhere about this page. And I or a member of my team would be … Can’t even speak today.

Would be delighted to speak to you and show how we can help you formulate some of these strategies in your own business.